The In’s and Outs of Vocal Production

How familiar are you with the tasks of a vocal coach, vocal producer, or vocal engineer? You might have come across these different roles in our industry. Some might not seem so common, but in fact, all of them have become part of modern-day productions. Vocals are arguably the most important element of your recording. Obviously, this depends on the genre, but in most pop music, the vocal is crucial in conveying the emotion of the listener and thereby has a great impact on the production. The lead vocal can make or break a song.

Therefore, it shouldn’t be too surprising that we are paying it some long-overdue attention. In this blog article, we are going to take an in-depth look into all the roles that produce the final sound of the vocal. This does not mean that it’s always a different person for each role. As a matter of fact, a lot of times, just one person will wear multiple hats based on their talents or due to limited budgets.

Now let’s have a closer look at the different roles in the Vocal Production process.

The role of the vocal coach is to focus on the technique of the vocalist. Usually, a vocal coach is not just there for a single recording in the studio but assists an artist for a longer period of time (which might include a tour). This includes teaching different singing techniques, providing the artist with warm-up routines, coming up with suitable exercises and give custom made advice on voice protection. The vocal coach also assists a vocalist in improving diction, especially when it comes to the proper pronouncing of foreign languages. It’s essential that the vocal coach understands the range of the vocalist, along with the strengths and weaknesses. In general, this person is very familiar with the anatomy of the voice and body in general.

Offering support to ‘Evoke Emotion’
As a vocal coach, you need to be acquainted with several music genres and be able to connect with the artist on a personal and emotional level. In a way, a vocal coach is a life coach as well: if the artist had a rough day, the performance can be affected. The vocal coach is there for mental support and has to make sure the artist feels comfortable and delivers a great performance, in the studio or on stage. A vocal coach needs to be very good at connecting with all kinds of people and have that gift of making people feel at ease.

Motivate and Be Fun
It’s not uncommon for the vocal coach to be involved in writing and producing the vocal arrangements, often together with the (vocal) producer. A vocal coach needs to have musical skills to be able to figure out the right harmonies for backing vocalists or has to come up with counter melodies for a second vocalist. A vocal coach should have experience with diverse music genres and develop engaging lessons. To be successful, you should be comfortable working with singers of all abilities. Outstanding vocal coaches demonstrate superb analytical skills, patience, and have the ability to motivate struggling students to continue their exercises. As a vocal coach, it’s key is the balance between motivating someone, being strict, and creating the right vibe so the artist delivers.

A vocal producer is often hired for a specific job or record and is there to focus on the overall vibe of the vocal recording. It’s possible that this is a different person than the overall producer. In that case, the vocal producer is there mainly for the artist and doesn’t have to worry about the rest of the instruments. The vocal producer needs to make sure the right emotion is evoked and that the perfect performance is captured. He or she needs to prepare the artist for their best performance by creating an open, comfortable ambiance in the studio. Just like the vocal coach, they need to be a people person.

From vulnerable to trust
Being behind the microphone is quite vulnerable for an artist. Singing is quite an intimate process. This become extra challenging while somebody tells them to “sing this a little bit louder” or “again, but with more passion please”. Building trust is key! – an artist should be able to trust the vocal producer, be able to relax in their presence, and rely on the integrity of the producer. Alongside the artist, the producer arguably has the biggest impact on the recording of the performance. The (vocal) producer’s role includes finding the right key, tempo, working on the arrangement, using effects, tonality, and deciding when the performance is right.

Pick the right demo singer
When an artist is not there when a song is being written, demo singers can replace the artist for the time being. It’s the job of the (vocal) producer to choose a demo singer that is capable of singing the range of the artist. By doing so, at least the demo can be recorded already and the artist can practice the song before entering the studio for the final recording.

It takes Two to Tango
It takes experience to figure out how to take an artist to the right state of mind for the performance. It’s the vocal producer’s job to make sure the artist is in the right place and to create a good vibe in the recording studio. It takes a lot of communication with the whole team of sound engineers, assistants, the vocal coach, sometimes the rest of the band and the artist itself. If the communication is blurred or the vibe isn’t right for whatever reason, the performance of the vocalist will decrease considerably.

Speed is key!
In this whole process, speed is key! Nobody wants to wait for hours in the studio because the engineer has to figure out where that great take is hiding. It’s essential that the artist can listen to the result immediately and that the vocal producer can make decisions on the spot when the artist is still in the room and a dialogue is possible. Do we need more takes? Do we need to schedule another recording day or is the right emotion evoked and is the perfect performance captured? If the answer is yes, the vocal producer can make creative decisions and after that, the comped vocal recording is passed on to the vocal (tuning) engineer.

Pitch Correction Devices
In the 2000s, the increasing use of recording software containing vocal processing algorithms and digital pitch correction devices are used. Kuk Harrell said “it’s the sound of today in pop music. But I use it as an enhancement and not to create the sound. My role is to capture the artist’s personality. To trick them out with Auto-Tune would defeat that purpose, but consumers are used to hearing things pitch-perfect so I use pitch correction to ensure that I have a flawless performance.”
This is a valid point. Sometimes people looking down at engineers who use pitch correction to tune a performance. However, where it would be possible to release a pop record in the 80s with a vocal slightly out of tune, we have become so accustomed to perfectly tuned vocals that when you would play an untuned song on the radio, it would stand out. Hence the reason someone will typically slightly touch up a performance. Not in order to correct big mistakes, but to create a flawless performance.

That brings us to the engineer tuning the vocals, which sometimes is done by the (vocal) producer or mixing engineer. Sometimes also referred to as vocal post-production. As part of the Abbey Road Institute Miami team, we are proud to have an expert in the field, Natalia Ramírez, who is a Grammy winning engineer with strong expertise in vocal tuning. When she works on a vocal, she meticulously checks each word and phrase. She slightly tweaks edits, replaces syllables, retime breaths, align backing vocals and tune them as well. Excluding certain styles, her job is to make sure the performance is fully in-tune without the listener notices that it has been tuned. It takes a lot of time and practice to become a vocal tuning expert. 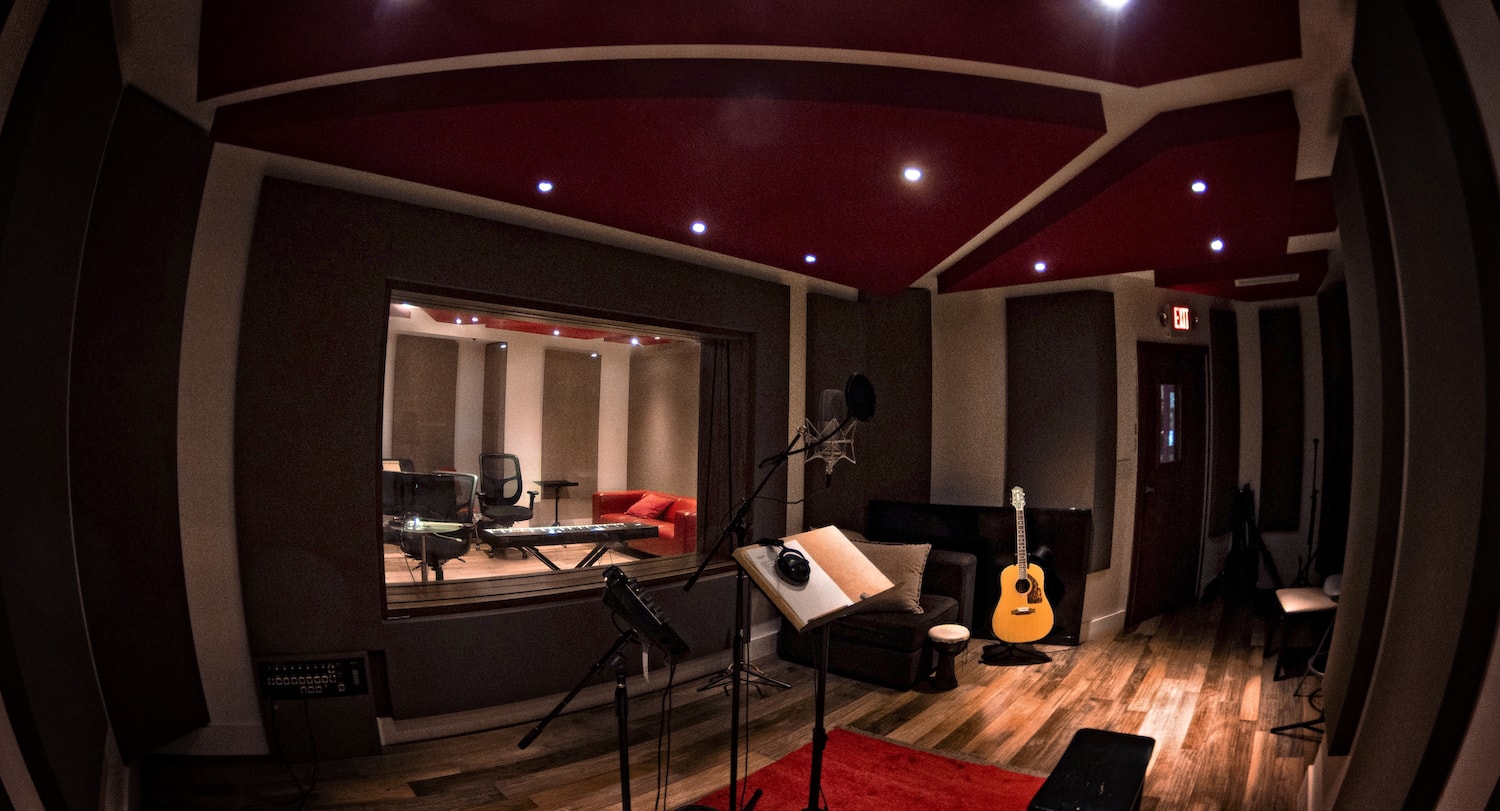 The mixing engineer receives the session after the recording, editing, and comping is completed. His or her role is to make sure the vocal sounds right while being played along with the other instruments. And last but not least, conveys the right emotion! This involves gaining, as in leveling, compression, EQ’ing, de-essing, and the use of the right reverbs, delays, and echoes. Effects are very important to get the right vibe, and sometimes this gets done together with the producer. Certain delay throws might have been added already, so the mixing engineer gets a good impression of the vibe the producer has in mind and knows which paths to follow. The mixing engineer aims to take the vision of the producer to a higher level.

Compression
The vocal is a very delicate instrument, and the choice of compression and EQ can really have a big impact on the emotion. For example, using too much compression on the vocal, instead of gain-riding, can make the vocal sound less alive. Imagine that the singer goes all out in the chorus, then the compressor ducks – because the singer gets louder. Most of the time this sounds like the singer is being choked. You have to be extremely careful to enhance the performance and not “kill it”.

Timbre
Also deciding the overall timbre of the vocal is key, how much air – high-end – versus how much low-end is being used. There has been a trend in the past two decades to leave less low-mids in the vocals, compared to the 70s or 80s. It’s kind of molding a sculpture; getting the right sound requires a lot of small tweaks that altogether have a major impact on the final sound of the vocal.

De-essing
De-essing is another important aspect. Overdoing it will make the singer lisp, while not doing it at all and applying lots of compression, can make the sss-es pears your ears. If you need to de-ess, consider using multiple de-essers in series so that you don’t get one which goes all out, but two de-essers that do half of the job. By doing so, the vocals are de-essed in a subtle way, in small increments. Like with using compression: this just sounds better. You can also consider drawing the ssss-es out manually.
Another aspect of the mixing engineer’s job is to make sure all the recorded vocals sound similar. Sometimes not all vocal parts are recorded at the same time or even in the same studio. Then the mixing engineer balances that out and makes it sound like it’s one take.

The mastering engineer’s role, besides the technical aspects, could include tweaking the overall vibe of the song, until it’s just about right. Maybe it sounds a bit too bright, and not warm enough, or too dark and the song needs to open up. Despite the fact that the mastering engineer works on a song that is mixed already, the mastering process still has a considerable amount of effect on the final sound and emotional impact of the song. This phase of record making often includes some compression, EQ, and de-essing. Each added process could in fact have an impact on the sound of the vocal.

When the mastering engineer finishes the last tweaks, the final destination is reached: the song is good to go, ideally with a vocal that stands out and a captured stunning performance that will last a lifetime.

That’s it! We hope you have a better understanding of the different roles and their impact on the final result of the vocals in a song. Next time you listen to your favourite song(s), you might appreciate the vocals even more.