Joaquina Blavia is a Venezuela-born Miami artist and singer-songwriter taking her music career to new heights. She wrote her first song when she was 8 and her star has only shot upwards ever since. This self-proclaimed bookworm can write and sing, but alongside she also plays the guitar and piano. After working in studios with music producers and releasing several original songs on the major streaming services, she soon realised that she wanted to expand her skills, in order to better translate her ideas into music. With a joint enrolment at Miami Arts House Academy and the Abbey Road Institute, having her eyes set on music production and sound engineering, she’s busier than the average teenager.

She recently sat with us to discuss her music journey, and this is her edited interview.

How did this all start?

I’ve always known that I wanted to do music. I was in and out of music or dance academies in my childhood. My parents work in the entertainment and communications industry, so I’ve always been around the arts. When I moved to the US, I got into musical theatre and acting, where I realized that I love singing.

Throughout the rest of my childhood, I did spoken word poetry and ballet. I went back to songwriting when I was around 13 because it mixed my love for poetry and literature with music. I’ve also been studying music theory since early high school.

You’re studying Music Performance at the Art House Academy and Production at Abbey Road Institute, how did that come about?

I always wanted to get into production because it interests me. When I met Julio Reyes (the founder of Art House Academy and Abbey Road Institute Miami), I had a chance to send him some of my demos, and he liked them. He gave me the opportunity to join the Art House program. When I found out about the joint venture with Abbey Road Institute, I thought it was super interesting because I’ve always been into production.

My goal was always to find a way to successfully translate my ideas as an artist into music. So, I thought it would be great to also join the Abbey Road Institute program to learn about sound engineering and production. This has helped me a lot as an artist because I’ve seen the bigger picture, and I’ve immersed myself in both sides of the music spectrum. 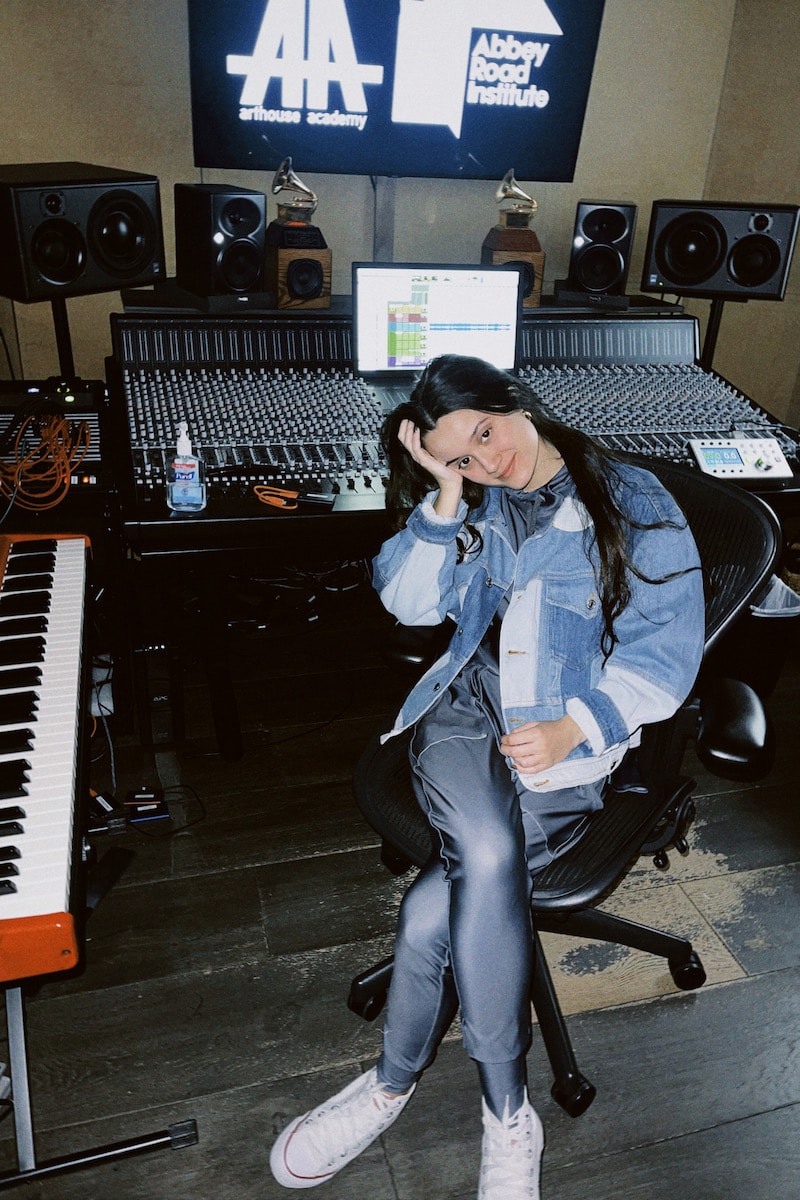 Joaquina Blavia in the studio

When did you make that step to move to the production side and start working with others?

I was 15 when I first stepped into a studio, and I knew absolutely nothing about music production. I started posting singing videos and covers on Instagram and YouTube when I was around 11 years old. That got me more followers as the years passed by. I eventually started posting my original songs. That led me to an opportunity to work with other songwriters in Miami when I was 16.

I started working in sessions and with different producers for my own stuff. I’ve released four singles as an introduction to my project. And I feel like Art House has allowed me to take a bigger step to show the world my music.

What made you decide to send your first demo to Julio?

I got his number through mutual friends. We sent him some demos that I was working on and some songs I had released. And then, I got the chance to meet him. Within a month and a half of meeting him, I started at Art House. It’s such a blessing because he and Robin Reumers (the Director of Education for Abbey Road Institute in Miami) believed in me from the beginning.

You’ve been in the programs since September 2021, how has it been so far?

Everyone here has become family to me, especially since I’m the youngest. I see them as my big brothers and sisters, and they see me like that too. It’s been amazing because we’ve been able to grow so much in a relatively short amount of time. I can’t even explain how much I’ve learned from my classmates because we all have different strengths and weaknesses, and we all lean on each other. So, I always have someone to turn to for help with anything.

What made you feel ready to release your project, what changed?

It was very hard to make the switch, and that’s something that Robin and Julio have been helping me with. I’m used to writing songs in my room and posting them online. And so, being in a space with extremely talented people who share my passion for music has made me want to step up my game and be the best version of myself.

It has helped me discover many other parts of myself. I’ve been able to explore other music genres, and I’m discovering new ways of songwriting. Art House is also preparing us in every aspect, including performance-wise, musically, and artistically. We’re learning how to market ourselves and use social media to our benefit.

We’ve learned how to maintain our image and find our sound at the same time. I know it’s going to evolve, but I feel like I finally found my sound and who I am as a songwriter. So, this experience helped me grow as an artist.

What would you say is your weakness?

Production and sound engineering. Before coming to Abbey Road Institute, the most I did was record some demos or watch other producers. I was familiar with the software, but I had never really gotten into it.

I’ve been working on production a lot because the Abbey Road Institute program is very curated. They know our strengths and weaknesses. So, they know what we individually need to work on. My teachers have made me look at sound completely different. Until now, I had never thought about the elements that go behind production and shaping sound. I find so much beauty in that now. 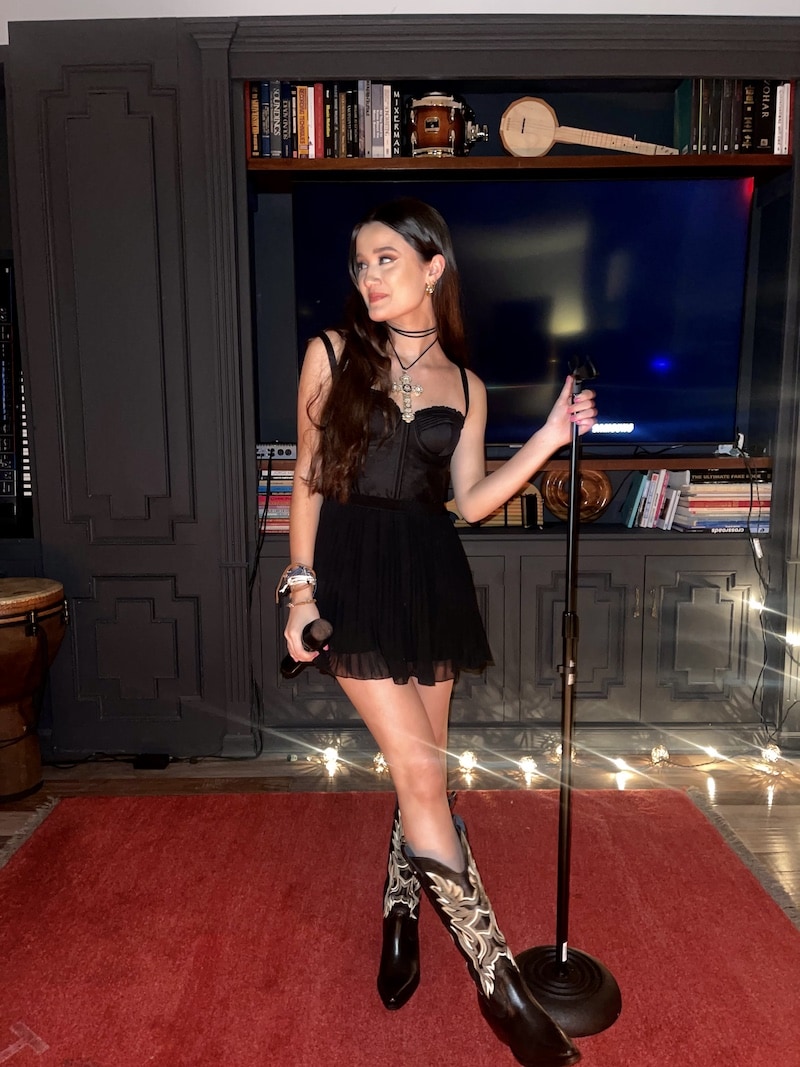 Joaquina Blavia is a Venezuela-born Miami artist and singer-songwriter

You have access to Dolby Atmos Studios and other new technologies. How is that for you?

It’s such a blessing because we get to witness something relatively new. Being able to listen to mixes in Dolby Atmos completely changes the way you think about music because you’re immersed in it. It’s an experience, and I feel like that’s what music is like whether it’s stereo, mono, or Dolby. So I feel like we’re witnessing the start of something that’s going to be historic.

The Miami Abbey Road Institute has a slightly different approach from the other institutes. Can you tell us more about how that works?

As artists, we’re now working on our debut EPs with Art House. And so, we do sessions where they pair up producers with artists and create small groups around the studio. We’ll then write for ourselves or other artists. I’ve had the chance to be in sessions as both an artist and a songwriter. It’s really cool because the producers on the Abbey Road Institute’s program get to work with the Art House artists in the sessions.

Because we’re a small group, Robin, Julio, and the rest of the team know us well. So, many of us have been involved in external projects that Julio is working on for big artists. Song camps from different labels have stayed at Art House. And so, we have the chance to sometimes write with them or assist in the sessions as engineers or producers. Sometimes we just help with whatever is needed around the studio.

Who inspired you to take this path and why?

My mom. Although she isn’t a musician, she is a very strong woman and has always followed her dreams. She always dreamed of the job that she has now, and she’s still working extremely hard to reach more of her goals. She always pushed me to be the best version of myself. When I told her I wanted to do music, she and my dad completely supported me. They’re my biggest supporters.

My parents inspire me because they live off what they love. They always told me that the biggest gift was to have a career that doesn’t feel like a job because you’re so passionate about it. They know that I’m passionate about this and they have never pushed me to do anything else. They’ve just pushed me to be the best version of myself. 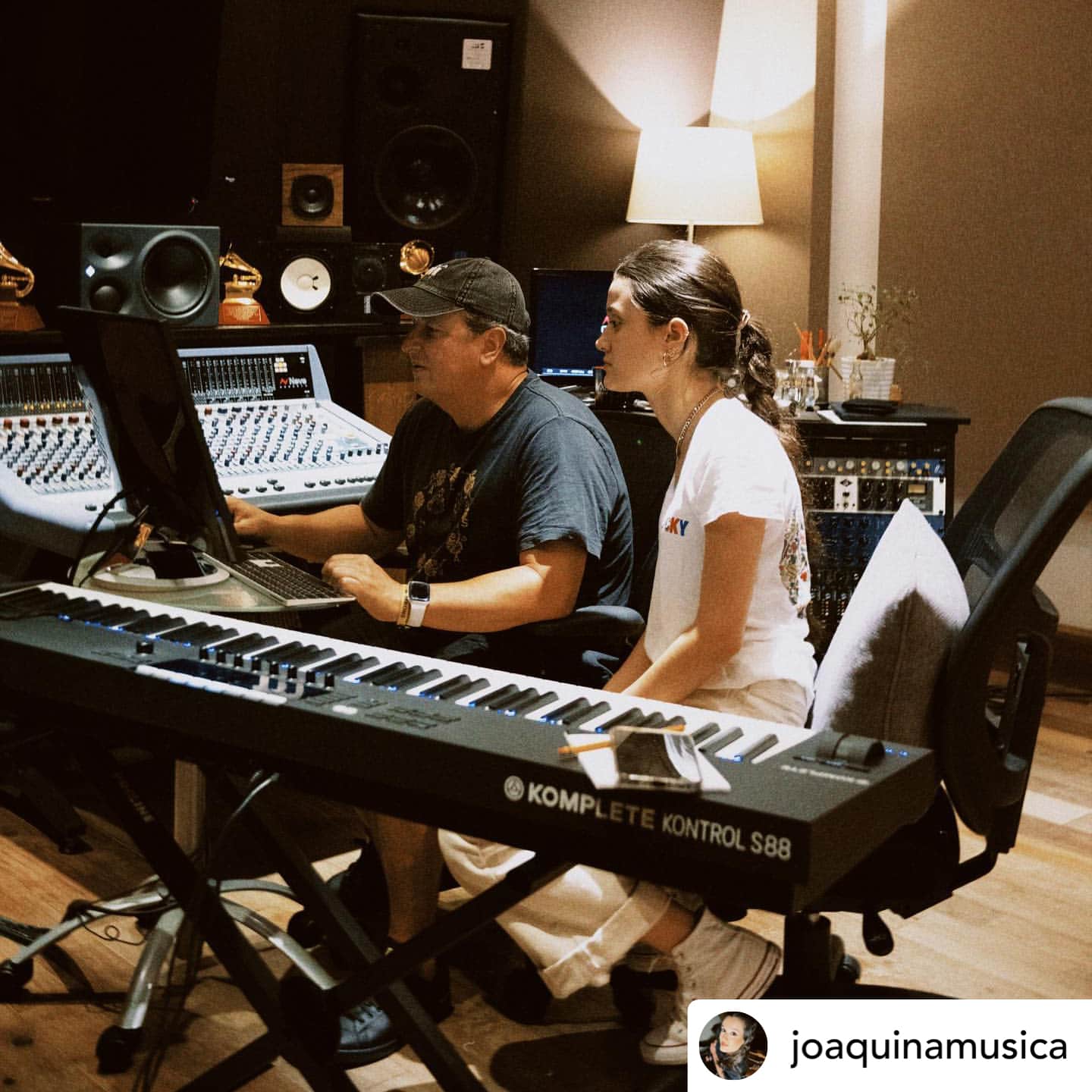 Joaquina Blavia in the studio with Julio Reyes

Who are your biggest musical inspirations?

Female singer-songwriters like Taylor Swift, Shakira, Joni Mitchell, and Carole King. They are iconic singer-songwriters that are also very honest in their lyrics. I also love Bob Dylan. In the Latin world, I love Alejandro Sanz and Juan Luis Guerra, who are also amazing songwriters.

What I love about these artists is their vulnerability and their ability to express themselves unapologetically in their lyrics. Their songs are so amazing because they talk about real-life issues that you may not expect them to sing about.

What’s your vision for the future?

I’ve been growing a lot as a songwriter, artist, performer, and singer, which is amazing. My biggest goal is to release a body of art that I’m really proud of and that people will listen to and be amazed at the topics I sing and write about.

I want to have very powerful and vulnerable lyrics that express something that people didn’t know they needed to hear or that they didn’t know someone else also felt. I want to always put out honest music and keep growing both as an artist and a producer.

I want to immerse myself in the world of engineering and production as much as I can. So, my vision for the future would be to keep growing. I want to learn from everyone around me and leave Art House and Abbey Road Institute prepared and fueled up for the future.

As an artist, what value do you want to bring to people that listen to your music?

My favorite thing about Art House and Abbey Road Institute is that we are taught about music as a real-life expression of emotions and thoughts. We don’t create art to please the algorithm or have number one hits. This is amazing and obviously what we want, but it’s not our end goal. Our end goal is to put out music that genuinely expresses our thoughts, and I feel like that can be so lost in today’s world.

We’re making real music that we feel is going to connect with people. We all feel that we’re starting a movement. We want to be like a little grain of sand that makes a positive impact.

Thank you Joaquina Blavia for the interview!

You can follow and learn more about her work at

Are you curious to learn more about our programme? Feel free to book a call!